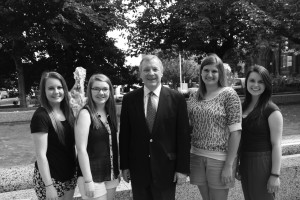 Kira Eidson, Grace Ruxlow, Dustin Speckhart, Lindsey Jennings and Abbie Thompson represented Adams Electric Cooperative and Adams Telephone Co-Operative in Washington, D.C., during the annual “Youth to Washington” Tour, June 12-19. This event, sponsored by the electric and telephone cooperatives of Illinois since the late 1950s, is an introduction for rural youth to our democratic form of government and the cooperative business model.

The students met with U.S. Senator Dick Durbin and were among 65 rural Illinois youth leaders selected for the trip. The Illinois students joined more than 1,660 young leaders from across the country from 44 states. In addition to the Capitol, they also visited Gettysburg, Arlington National Cemetery, the Washington National Cathedral, several Smithsonian Museums, The U.S. Supreme Court, the U.S. Holocaust Memorial Museum, the World War II Memorial, memorials to Presidents Lincoln, Jefferson, Washington and Roosevelt, the Royal Embassy of Saudi Arabia, the Newseum and a number of other historical sites.

Sophomores and juniors in high schools that are within the service area of Adams Electric Cooperative and Adams Telephone Co-Operative are eligible to participate in the annual program.