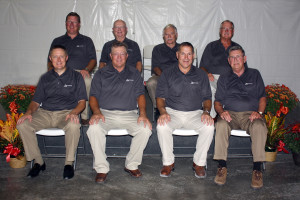 On August 29th, Adams Telephone Co-Operative held their 61st Annual Meeting of Members at their Cooperative headquarters in Golden, providing members with a unique opportunity to connect with their Cooperative and to celebrate sixty-one strong years in business. Approximately 700 people attended and everyone enjoyed a meal prepared by the Mendon Lions, business meeting, giveaways, and an evening of family fun.

Jim Broemmer, Chief Executive Officer, updated the Adams members about two exciting pilot projects that Adams is involved with. One pilot project involves Instant Care, a home telemedicine device. Broemmer stated, “As our rural population ages, we need to consider alternative ways to provide medical care for our communities, and to allow seniors to remain in their homes. Telemedicine is a viable way for medical providers to connect with rural patients, and Adams is proud to be part of this long-term project.” The other pilot project he covered is the Federal Communication Commission’s Lifeline Broadband Pilot project, which provides low-income households the opportunity to purchase discounted broadband services. Broemmer added that, “Hopefully in the future, a permanent broadband service solution will be available for these families.”

Three area youth were also recognized at the Annual Meeting of Members for their achievements. Emery Gronewold of Golden received the Adams Telephone Co-Operative $500 College Scholarship. Winners of Adams “Youth to Washington” program Anthony Holtschlag of Camp Point and Chance Vose of Griggsville reported on their week-long trip to our nation’s capital sponsored by Adams.