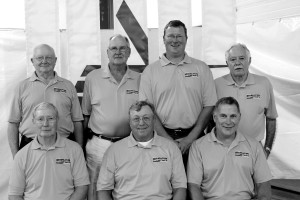 Golden, IL – On September 2nd, Adams Telephone Co-Operative held their 63rd Annual Meeting of Members at their Cooperative headquarters in Golden, providing members with a unique opportunity to connect with their Cooperative and to celebrate sixty-three years serving the region.  Approximately 730 people attended and everyone enjoyed a meal prepared by the Mendon Lions, business meeting, giveaways, and an evening of family fun.

Adams Telephone Co-Operative’s commitment to serving its members with fiber was reflected on during the joint President and Chief Executive Officer’s report.  Jim Broemmer, Chief Executive Officer, reported that “60% of Adams Telephone Co-Operative members are served by fiber.  That is a much higher average than the rest of Illinois, where only 14% of Illinois residences have a fiber connection.”

Bill Scranton, President, shared with the membership that over 2,100 prospective customers have inquired about fiber on the followthefiber.net, and that since last September, almost 300 new customers in Quincy, Bowen and Perry have been connected to Adams Fiber.  Scranton reported that “Construction is currently underway in Lexington, Trinity Lakes, Stone Crest, Cheshire Hills, Irish Hills, and Ewbanks with over 270 residents signed up for service from Adams.”

Members enjoyed seeing new technology utilizing wi-fi connections in the Connected Life display, from digital photo frames to crockpots controlled by smartphones.  Optura, a new digital entertainment service, was demonstrated, which features an extensive channel line-up and WatchTVEverywhere, enabling customers to view programming on cell phones or tablets.  Optura Local TV, an affordable way to watch local channels including ABC, CBS, CW, Fox, NBC, and PBS, was also exhibited. In the Adams Fiber display, members learned how fiber is spliced, along with a digging area for the younger guests.

Three area youth were also recognized at the Annual Meeting of Members for their achievements.  Jordan Cook of Camp Point received the Adams Telephone Co-Operative $500 College Scholarship.  Winners of Adams “Youth to Washington” program Lindsey Jennings of Mt. Sterling and Abigail Thompson of Augusta reported on their week-long trip to our nation’s capital sponsored by Adams.