SPRINGFIELD – Senator Jil Tracy and Rep. Randy Frese met with students representing Adams Electric Cooperative and Adams Telephone Co-Operative during the Illinois Electric and Telephone Cooperative’s Youth Day on Wednesday, March 29 in Springfield. More than 240 students from around Illinois had an opportunity to visit the State Capitol, view state government in action and question their legislators on key issues. 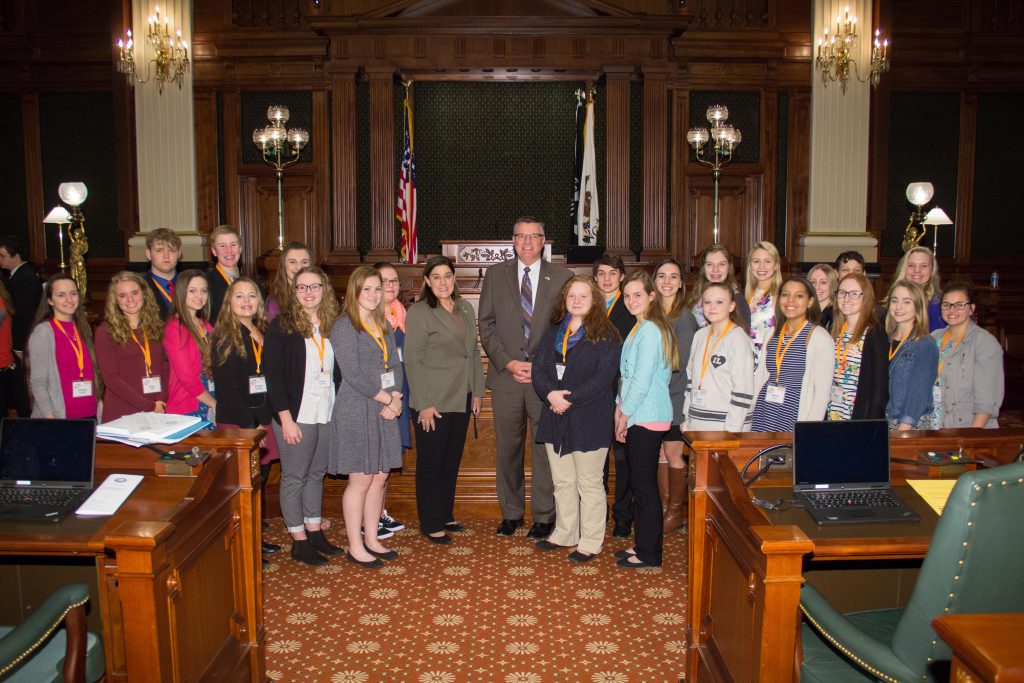 “Elected officials always enjoy the opportunity to meet with students and learn first-hand some of their concerns, especially in this current political climate. Many of theissues debated in the Illinois General Assembly affect their future,” said Duane Noland, President and CEO of the Association of Illinois Electric Cooperatives (AIEC).

During lunch, Comptroller Susana Mendoza addressed students and chaperones and challenged them to take an interest in the political process and encouraged them to use their voices and reach out to their representatives and senators. Sophia Marcolla, the 2016-17 Illinois Youth Leadership Council Representative from Adams Electric Cooperative, spoke about her experience on the Youth to Washington tour and the importance of leadership. While in Springfield, the students also visited the Old State Capitol and Abraham Lincoln Presidential Museum.

At the end of the day the students were interviewed for the chance to participate in the Youth to Washington Tour from June 9-16, 2017.Youth Day is designed to introduce young rural leaders to state government. There were 25 co-ops from across the state represented at the event.

Adams Electric Cooperative is a member of Touchstone Energy — an alliance of 750 local, consumer-owned electric utilities around the country. Adams Electric Cooperative is committed to providing superior service based on four core principles: integrity, accountability, innovation and commitment to community. The co-op serves more than 8,593 meters over 2,229 miles of line in parts of Adams, Brown, Hancock, McDonough, Pike and Schuyler counties. For more information visit www.adamselectric.coop.

Adams Telephone Co-Operative has 65 years of experience in the telecommunications industry, providing telephone, television, and broadband Internet services in places where there was previously little or no coverage. The company is well known for business communication, Internet offerings and for investing in communities to further economic development. For more information visit www.adams.net.